Why Evangelicals Disagree on the President

All four Gospels describe violence in the Garden of Gethsemane. Jesus wept alone among the olive trees, praying that the cup of suffering should pass from him. When he returned to his weary disciples, soldiers and religious leaders confronted them. Peter responded with a flash of steel and cut the ear off a man named Malchus. “Put your sword away!” Jesus said as he healed Malchus. “Shall I not drink the cup the Father has given me?” (John 18:11).

Jesus was led to the high priest, and then the Roman governor. “My kingdom is not of this world,” he told Pilate. “If it were, my servants would fight to prevent my arrest by the Jewish leaders. But now my kingdom is from another place” (18:36).

The kingdom of heaven is elusive. It comes not with a sword but a sacrifice, not a crown of iron but a crown of thorns. It arrives not through the powers of the world but through the inverted power of the cross, which is to say the power of powerlessness. Peter swung the blade. Jesus drank the cup.

This story comes to mind as we approach a presidential election with deep divisions among us. Evangelical believers who have long labored in the same fields now find themselves in warring camps. One camp declares they cannot comprehend how men and women who share their faith could possibly support the incumbent. The other camp wonders how anyone nurtured by the Word could reject the incumbent. The camps not only disagree but cannot understand one another. Unable to see reason in the opposing view, each side asserts the other has succumbed to unreason, to prejudice, or to the lust for power or approval.

Our inability to understand the rationality of an opposing viewpoint is more often a failure of imagination on our part than a failure of rationality on theirs. The difference between the camps cannot be that one side is truly christian while the other is not, or that either side possesses a monopoly on good ideas and good intentions. Countless men and women striving with every bone and tendon to follow Jesus stand on both sides.

If it were a division between conservative and progressive evangelicals, it would be more easily understandable. Yet this is a division among conservative evangelicals, and I have wrestled for years to understand it. Perhaps I have still not understood it, but I want to explain it as best I can. Underlying the differences between us, I’ve come to believe, is a different vision of the kingdom of God.

Following former editor in chief Mark Galli’s editorial in December, and my statement affirming the substance of its concern, I heard from respected and beloved friends who were heartbroken. We work tirelessly, they said, to save the lives of the unborn. We stand on the front lines defending the religious liberties that permit families and churches to live according to conscience. We are working, they said, toward a government and a culture that hears christian concerns and honors christian values. These letters were as painful to read as they must have been to write, as dear friends felt we were betraying the cause in a critical moment.

With some exceptions, the sentiment generally came from people who were formed in environments where Christianity was, or recently had been, the dominant cultural force. The christian ethic had long been an influence for good, they believed, and as it waned they saw their own freedoms curtailed but also the common good of the community deteriorating. They also believed that years of progressive foreign policy had diminished our global standing and turned a blind eye to christian persecution overseas. These concerns led them to support a politician who contradicts christian values in his personal behavior but, they believed, advanced christian values in the public square. They did not admire his personality or condone his rhetoric, but they believed he and the party he represents would usher in the greatest good for society as a whole.

I will call this contingent the Church Regnant. The Church Regnant sees the kingdom of God, the end toward which we strive, as a world in which men and women are free to follow their faith, life is held sacred from conception to death, families can raise their children in biblical truth, churches take the lead in charity, and government provides a stable order for the flourishing of meaningful enterprise.

Members of the Church Regnant are concerned with foreign and economic policy but feel especially compelled to support the present administration for its stances on life and family. Failing to vote for the Republican empowers the party that protects the appalling abortion regime and that advances a sexual ethic that leads to immense confusion and suffering.

There are, to be sure, more virulent strains of support for the incumbent president. But there are also loving and reasonable supporters, and charitable disagreement requires that we represent our brothers and sisters at their best. We do our faith no favors when we caricature our fellow faithful.

There is nothing essentially irrational or immoral in the position stated above. It leads the Church Regnant to place a higher value on the acquisition and use of political power. The Church Regnant views the election starkly as a battle between good and evil. The vices of the president seem small when the virtue of the world hangs in the balance. Winning political power means protecting the christian way of life and sowing seeds of truth and goodness into culture, and thus bringing God’s blessing upon the land. Losing political power means the culture spirals into deepening immorality and untruth, eroding the foundations of society and leading to greater suffering for all. For these friends, then, to undercut the support of the president is to undermine the power of Christians to shape policy in a manner that protects the church and benefits the world.

Of course, another group responded quite differently to the Galli editorial. They called and wept on the phone. They sent balloons to the office. They encouraged us to stand strong against withering criticism. They were deeply grateful someone had articulated their profound ethical and spiritual misgivings about evangelical support for Trump.

How could this be so? The two groups are not divided along theological lines, and both would have been considered conservative prior to the Trump movement. They study the same Scriptures, affirm the same creeds, and sing the same hymns. They also hold most core ethical commitments in common, from religious liberty and the sanctity of life to God’s loving intent for marriage and sexuality.

This contingent is larger than you might think. When evangelicals are defined by belief and all ethnicities are included, only 58 percent of evangelical voters supported Trump in 2016—which is to say nothing of those who chose not to vote at all.

The Church Remnant is captivated by a fundamentally different vision of the kingdom of God. The kingdom, in this view, is too sacred to be confused with winning elections and passing laws. It is not a political dispensation or social order. It is not a kingdom of this world. Instead, the kingdom breaks into time and space when men and women sent by the king seek the lost and serve the least. The kingdom of heaven is among us when we speak the gospel in word and deed, serve the homeless and the refugee, and come alongside our suffering neighbors.

For the Church Remnant, the kingdom of God is less about the acquisition of power than the divestment of power, laying down our rights and privileges as Christ did (Philippians 2) in order to serve the powerless. In other words, Christendom is not the kingdom, and representing Christendom is not the same as representing Christ. The kingdom of heaven is not about the sword but about the cup, not about defending ourselves but about dying to ourselves.

For this reason, the Church Remnant places a higher priority on the purity of the church than the prosperity of the country. National prosperity matters, but nations flower and fall while the church endures into eternity. Its unity and integrity bear witness to the divine character of Christ (John 17) and cannot be compromised. This makes the Church Remnant more sanguine about the loss of cultural and political influence. The court of power possesses an enormous gravitational attraction that too often distorts our ability to see and to witness Christ clearly. Sometimes the church needs time in the wilderness to remember who she is.

The Church Remnant would rather the church lose its influence than its integrity, even if the loss of religious liberties were to lead to persecution. When has persecution ever defeated the church? Surely the same God who spoke the stars into being, who has preserved the church around the world for two thousand years, can preserve the American church against four years of political exile. The church only ever dies from within.

But if the church loses its integrity and therefore its witness, then the culture around it will suffer. Indeed, for the Church Remnant, the evangelical embrace of the president has advanced corrosive values in the culture—giving encouragement to narcissism and materialism, greed and lust, racism and sexism—that are just as damaging if not more so than misbegotten policies.

The readers who were grateful for Galli’s editorial did not cast stones at fellow believers who voted reluctantly for Trump. They were more concerned with evangelical leaders who created an impression that the entire church had rallied around him, particularly when those leaders showed no willingness to publicly condemn his misbehavior or defend the victims of his rhetoric. This, in their view, tarnished the witness of the body of Christ. It led their friends to leave the pews and their children to renounce their upbringing. No number of policy victories could justify this. White evangelicals, they felt, had won the election but lost a generation.

The disagreement between the Church Regnant and the Church Remnant is less about holding different values than prioritizing them differently. The Church Regnant would respond that they too value the witness of the church and often give their lives to evangelism and service, but Christians are called to fight for things that matter to God even when doing so makes us unpopular. The Church Remnant would say that they too care for the sanctity of life and the protection

President Trump Pens a ‘Message to Black America’ in OP-ED 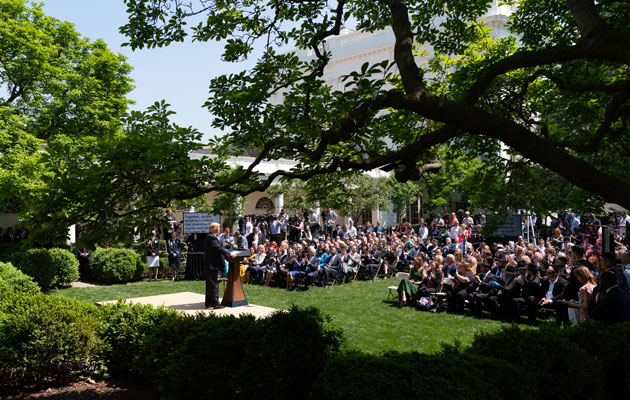 Belinda Bauman: The Day After