Written by The Ministry of Jesus Christ on February 3, 2022

Why are missionaries drawn to their work? Most would answer that their consuming passion is to share the gospel, in obedience to Christ’s command to make disciples of all nations. And they would probably recoil at any suggestion of earning fame, glory, or honor for themselves.

For good reason, missionaries tend to resist thinking of missionary service as something that might bring any kind of reward, apart from the inherent satisfaction of leading others to Christ. In Mission Affirmed: Recovering the Missionary Motivation of Paul, Elliot Clark draws on the apostle and his letters to the Corinthians to suggest that the pursuit of rewards isn’t necessarily out of place.

Clark, who works with Training Leaders International, reminds readers that Paul wasn’t content merely to reach more people with the gospel—he also sought God’s approval of his work. A missionary’s willingness to sacrifice in service to God, he argues, isn’t just a matter of denying oneself for the sake of the mission. These sacrifices also anticipate the moment of Christ’s return, when workers in the harvest will be repaid according to their labors (1 Cor. 3:8). Clark wants to restore a sense that missionaries should fervently seek God’s praise.

The book, however, is not limited to the question of missionary motivations. Clark addresses several contemporary issues in missions, making the book relevant not only to missionaries in the field but also to students of cross-cultural missions, mission leaders, and local churches. Between his training in cross-cultural mission, his education at Southern Baptist Theological Seminary, his years of experience planting churches in Central Asia, and his travels around the globe equipping indigenous church leaders, Clark has a valuable perspective worth hearing.

The right kind of influence

In the subtitle of Clark’s book, “Recovering the Missionary Motivation of Paul,” one hears echoes of a book written over a century ago, Roland Allen’s Missionary Methods: St. Paul’s or Ours? This seems deliberate, as Allen’s missiological ideas appear throughout Clark’s own work.

Like Allen, an English missionary to China around the turn of the 20th century, Clark acknowledges the need for missionaries to reject colonialism and paternalism, while instead helping local Christians reach their own peoples. Clark points out, however, that this approach has led some missionaries to overcompensate by becoming overly cautious about exercising their influence. To this, Clark says, “The critical question for Western missionaries in a postcolonial world isn’t necessarily, ‘How do we limit our influence?’ Instead, it’s better to ask, ‘Are we influencing others in the right way?’”

In framing the task of missions this way, Clark cuts against the “three-self” principle, originally presented by the 19th-century missions leaders Henry Venn and Rufus Anderson. According to the three-self ideal, indigenous churches should aim to govern themselves, support themselves financially, and conduct their own missions work, thereby retaining their independence from foreign bodies.

In critiquing this principle, Clark calls for meaningful partnerships between local Christians and foreign missionaries. “Missions,” he writes, “is always a cooperative partnership. Which means the solution to dependency isn’t independence. It’s interdependence.” As Clark argues, an unyielding commitment to independence leaves indigenous churches to fend for themselves, forgoing the sorts of collaboration and partnership that can contribute to their spiritual well-being.

For Clark, an emphasis on collaboration and partnership helps prevent missionaries from having a myopic focus on making as many disciples as possible. He certainly affirms Jesus’ mandate to make disciples, but he stresses that this mandate goes beyond preaching the gospel to those who have not yet heard it. Using Paul as his guide, he notes that the apostle not only proclaimed the Good News but also sought to bring hearers to maturity in Christ. Paul was zealous for the advance of the gospel, but he also demonstrated great concern for particular churches—for their ecclesial unity, theological integrity, and moral purity.

As Clark explains it, too many contemporary missions movements prioritize the rapid multiplication of disciples “with a programmatic and result-driven focus that looks more like Western capitalism and business franchising than genuine Christlike servanthood and faithful stewardship.” By contrast, Paul’s vision calls for multifaceted ministry that shapes new Christians and churches toward fullness in Christ.

Clark identifies two contemporary issues that work against the cultivation of spiritual maturity on the mission field. The first is the popularity of prosperity-gospel thinking. His concern is that gospel presentations can be improperly tied to people’s aspirations for a better life. Rather than naming any particular preachers of health and wealth, he traces the source of harm to Western missionaries themselves, who often “carry the virus of prosperity theology latent within them.”

American missionaries, he argues, can be the worst proponents of this false gospel, whether they are aware of it or not. Taking this critique a step further, he calls out American evangelicals who possess only a “partial theology of suffering” and “live in a society that despises lack [of resources] and distrusts the weak, that shames insufficiency and only glories in grief once it’s gone.” Such words should spur readers to pause and examine their own attitudes, words, and motives.

A second obstacle to realizing Paul’s vision for missions is a tendency to rely on underprepared missionaries. Clark writes of “untrained and inexperienced twenty-somethings” who are sent “to address complex issues of poverty and public medicine.” The results can be disgraceful, if not devastating.

Clark states his case bluntly: “We are not all called to be missionaries.” His point is that not all Christians are gifted and equipped to serve cross-culturally, which is certainly true. But Clark could have achieved greater nuance by drawing on the work of Ralph Winter, founder of the US Center for World Mission, who proposed a helpful geographic and cultural spectrum for classifying different kinds of missionaries.

Winter applies the label M-1 to a missionary sent across the street, across town, or across regions sharing the same general culture. David Nasmith, the 19th-century founder of the City Mission movement, had this category in mind when he said, “Every church shall be a missionary body, and every member a missionary.” M-2 refers to missionaries sent to places where the culture is similar but the people speak a different language. And M-3 refers to missionaries sent to remote parts of world characterized by vastly different cultures and languages. Clearly, all three sets of missionaries play important roles in carrying out the Great Commission. But for Clark, it seems only the latter two are qualified for the work.

Certainly, M-2 and M-3 missionaries should be prepared for cross-cultural ministry, and Clark makes this point well. For this reason, he places responsibility on local churches to vet missionary candidates. Churches, he argues, are ideally suited to screen prospective missionaries for christian character and biblical competency. To this end, the book includes a helpful appendix on “Questions for Churches to Ask a Missionary Candidate.”

While Clark returns time and again to the words and example of Paul, he generously weaves stories of missionaries throughout the book, citing John R. Mott, Amy Carmichael, David Brainerd, Adoniram Judson, Anna Hampton, Nik Ripken, James O. Fraser, Henry Martyn, and others. He refers to these men and women as his heroes. As a historian, I appreciate how Clark fleshes out his understanding of proper missionary motives with historical figures who lived them out.

Gaining what we cannot lose

At the heart of Mission Affirmed is Clark’s appeal to Scripture. Beyond emphasizing theme of Paul’s motivation as articulated in his letter to the Corinthian church, he uses the whole of Scripture to reflect on the most pressing issues facing missionaries, mission leaders, and churches today.

The book includes an insightful discussion of the Insider Movement—followers of Jesus from non-christian backgrounds who remain culturally and relationally connected to their former faiths. And Clark

‘A house united can do anything’: Biden promotes civility at National Prayer Breakfast 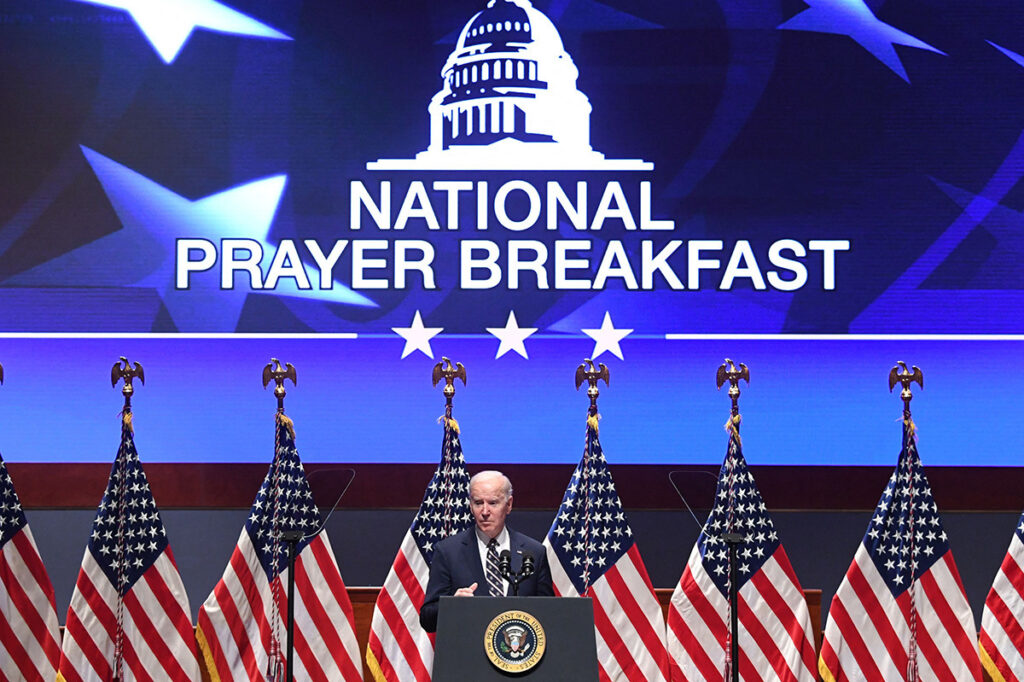