The killing of Zawahiri: Twenty years too late – analysis

The US finally found and killed Ayman al-Zawahiri, the leader of Al-Qaeda on Monday night. He was found in Kabul, the capital of Afghanistan, in a counter-terrorism operation conducted by the CIA.

“Since the United States delivered justice to bin Laden 11 years ago, Zawahiri has been a leader of al-Qaeda,” US President Joe Biden said. “From hiding, he co-ordinated al-Qaeda’s branches and all around the world, including setting priorities for providing operational guidance and calling for and inspired attacks against US targets.”

How was Zawahiri killed?

While nobody is entirely sure how Zawahiri was killed, some have speculated that the Hellfire RX-9 missile was the weapon of choice. The Hellfire RX-9 uses multiple spinning blades instead of a warhead, and the reason some believe that this was the weapon used is that no explosion was heard following the airstrike.

Additionally, unlike the raid that killed Osama Bin Laden in 2011, there was no firefight before Zawahiri was killed, and according to reports, no family members were hurt or killed.

A Taliban fighter stands guard near the site where Al Qaeda leader Ayman al-Zawahiri was killed in a US strike over the weekend, in Kabul, Afghanistan, August 2, 2022. (credit: REUTERS/STRINGER)

According to various reports, Zawahiri was killed by two missiles as he stood on his balcony.

He was living a life of privilege in his “safe house” which was located in a nice part of Kabul. His wife and grandchildren lived in the same house and according to the Daily Mail the house was “owned by a top aide to Sirajuddin Haqqani, the Interior Minister for the Taliban, who is close to senior al Qaeda officials and is wanted by the FBI for questioning.”

The fact that Zawahiri was living in downtown Kabul, not far from various embassies, shows how he likely enjoyed support from the Taliban, as Bin Laden also did up until the end when he was found in Abbottabad near a key Pakistani military school.

The most wanted terrorists are always found living lives of privilege, usually with top-level official support in various places. The head of ISIS, a genocidal murderer who took women as slaves, was found living within shouting distance of the Turkish border. Turkey is a “NATO ally” but many ISIS members transited Turkey and many leading members of ISIS have been found near the Turkish border in Idlib, not far from a key border crossing. Members of other extremist groups have also been found in Turkish-occupied areas of Syria.

An ecosystem of terror

Terror masterminds don’t live in a vacuum, they are part of an ecosystem, one that is often backed by groups that have ties to key countries. For instance, Al Qaeda emerged among privileged men in the Gulf, many of whom had ties to the upper levels of Saudi society in the 1980s. ISIS emerged from thousands of men who came from Europe to Syria. Al Qaeda had backing from Pakistan, and when the Taliban returned to power last year it seems they gave support to Zawahiri.

Prior to their return to power in Afghanistan, the Taliban were hosted in Qatar, a US partner country that has also hosted Hamas members and backed other extremists.

This means that while it is easy to write headlines about how the US tracked down a terror leader, these leaders don’t exist in a vacuum. Instead, many terror leaders exist more in the milieu one finds in Godfather II, where the leader of the mafia family lives openly in splendor and has official connections. Yes, he is a criminal, but he is also useful to authorities sometimes.

Who was Ayman al-Zawahiri?

Ayman al-Zawahiri was born in Egypt in 1951. Like Bin Laden, he was born to wealth and lived a life of privilege. And, like many privileged entitled men, he gravitated toward hate and extremism.

This was an era in the 1960s and 1970s when the West was coddling extremists and hate-filled terrorists. Under the banner of “armed struggle,” many terrorists received positive coverage, and it seemed that the more they posed with guns and said they hated “Jews and Crusaders,” the more they seemed like “noble savages” who could be backed not only by college radicals but also members of western intelligence services who saw in them potential to be used against the Soviets.

This nexus, of coddling by the West, and privilege at home, became a toxic mix that helped provide for a generation of men to run into the arms of religious extremism. Their extremism was coddled, but it was also nurtured at home by those who believed that nationalist and “secular” leaders of many countries in the region were not providing the answers people needed. For a while these men had the run of things, destabilizing countries across the Middle East, carrying out genocides against minorities, and eventually, their actions led to 9/11 and other crimes.

Zawahiri studied medicine and upon graduating, joined the Muslim Brotherhood. It’s worth noting that the extremist and intolerant Muslim Brotherhood is the same group that inspired Hamas founders and also the leaders of the AKP party in Turkey.

Zawahiri was arrested, along with 300 Islamic radicals, following the assassination of Egyptian president Anwar Sadat in 1981. He became increasingly radicalized during his time in prison, and upon his release in 1985, he went to Peshawar in Pakistan where many similar radicals were gathering to fight the Soviets in Afghanistan. At the same time, he kept up his terror work in Egypt as head of the Egyptian Islamic Jihad.

With the Cold War ending, he and Bin Laden gravitated toward new opportunities. Zawahiri apparently attempted to join jihadists fighting Russia in the Caucasus and he went back to Afghanistan in 1997. He and Bin Laden joined their organizations together in February 1998, forming the “World Islamic Front Against Jews and Crusaders.”

Through all of this, these men were still living lives of privilege. Even though he was involved in plotting massacres, such as the Luxor attack on tourists in 1997 in Egypt, Zawahiri was also traveling throughout the 1980s and 1990s, allegedly using various passports as he went to Switzerland and Sarajevo; as well as Malaysia and other places.

It’s worth recalling that many Al Qaeda planners had this same jet-set access in the 1990s. With the Cold War over, the US was a global hegemon, it didn’t concern itself with these smaller pesky terrorists. Therefore they could easily transit via countries like Pakistan, which backed Al Qaeda and the Taliban. They also had support in the Gulf, and key writers in Saudi Arabia and the West found them to be romantic. Reports from May 1988 say that Jamal Khashoggi went to Afghanistan and met with members of Al Qaeda. In 1993 a headline in the Independent described Bin Laden as an “anti-Soviet warrior [who] puts his army on the road to peace.”

But these were not peaceful men. These were murderers who were antisemitic and sought to massacre innocent people all over the world. This Al Qaeda was a far-right organization, with an ideology no different from fascism and Nazism. Yet in the 1990s it was still being coddled even as it planned the bombing of US embassies in 1998 and then the attack on the USS Cole in Yemen in 2000.

At the time, the US saw the terror group as a law enforcement problem. Although there were some efforts to go after Al Qaeda, any real attempts to neutralize it before 9/11 came to naught. As such, these men enjoyed their privileges and jet-set life planning wars all over the world, up until the attacks on New York and Washington.

In the end, Zawahiri and his brand of terror changed in the 2000s. After 9/11 he became hunted, to some extent. The crown of terror extremism moved to new groups, such as ISIS and younger Al Qaeda cadres in Iraq. This new generation of killers didn’t care as much about large symbolic attacks, such as targeting embassies or tourist sites in Egypt, or world leaders.

Indeed, Zawahiri was believed to have been behind plots against Egyptian leaders as well as the assassination of former Pakistani Prime Minister Benazir Bhutto. The new generation of terrorists were more sectarian than Al Qaeda and more interested in the total ethnic cleansing of minorities in places like Iraq. The Gulf countries also shifted from giving some succor to the extremists to turning against the Muslim Brotherhood and Al Qaeda.

Without cash from the Gulf and with extremism drying up in the Middle East, the new generation of extremists are more likely to come from Europe, Africa or Asia. The fraternity that former Al Qaeda would likely not exist today because the world has changed. Unfortunately, many people paid the price for that change, especially minorities such as the Yazidis in Iraq.

The lesson of people like Zawahiri is that we should confront extremists early in their careers. Zawahiri enjoyed immense privileges most of his life. He was a globetrotter, and even as people were saying “never again” about the Holocaust, they were willing to romanticize or excuse the Al Qaeda “war on the Jews and Crusaders.”

Zawahiri was killed two decades too late, he should have been neutralized long ago, but he kept getting away with his deeds; whether it was leaving prison in Egypt in the 1980s, or getting away from Russia in the 1990s; he evaded capture and containment.

He was hoping to live out the life of an honored terrorist Emeritus with his friends in Afghanistan, marveling at how the Taliban had returned to power with even more international backing than in the 1990s. Indeed the Taliban live the high life in Doha, and they likely are backed by Iran, Russia, Pakistan and several other states today.

Zawahiri must have found it all a bit comical, a most wanted man living near the embassies of foreign countries in Kabul, having seen his friends return to power after 20 years of fighting the Americans and others. He met his end without really facing justice; it was easier to kill him quickly than have him answer for his crimes, to quickly sweep a part of history under the carpet so we can have closure to that era.

On This Day: 79 years since Jews revolted at Nazi’s Treblinka death camp 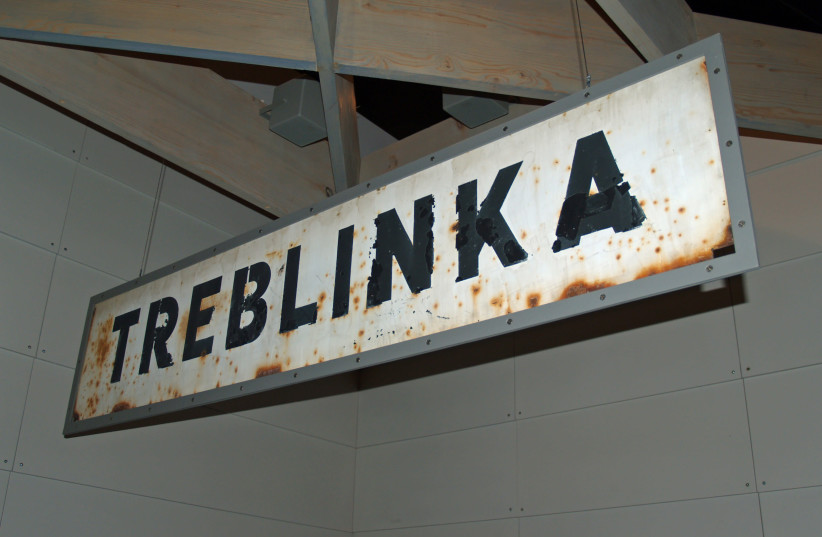