A man cries as he prays in the street near St. Anthony’s Shrine one week on from Easter terrorism attacks that killed more than 250 people, on April 28, 2019 in Colombo, Sri Lanka.

Government restrictions on religion are at a global high.

Social hostility toward religion, however, is at its lowest level worldwide since ISIS.

So says data analyzed by the Pew Research Center in its 12th annual measurement of the extent to which 198 nations and territories—and their citizens—impinge on religious belief and practice.

The 2021 report, released today, draws primarily from more than a dozen UN, US, European, and civil society sources, and reflects pre-pandemic conditions from 2019, the latest year with available data.

But across the globe, restrictions are present. 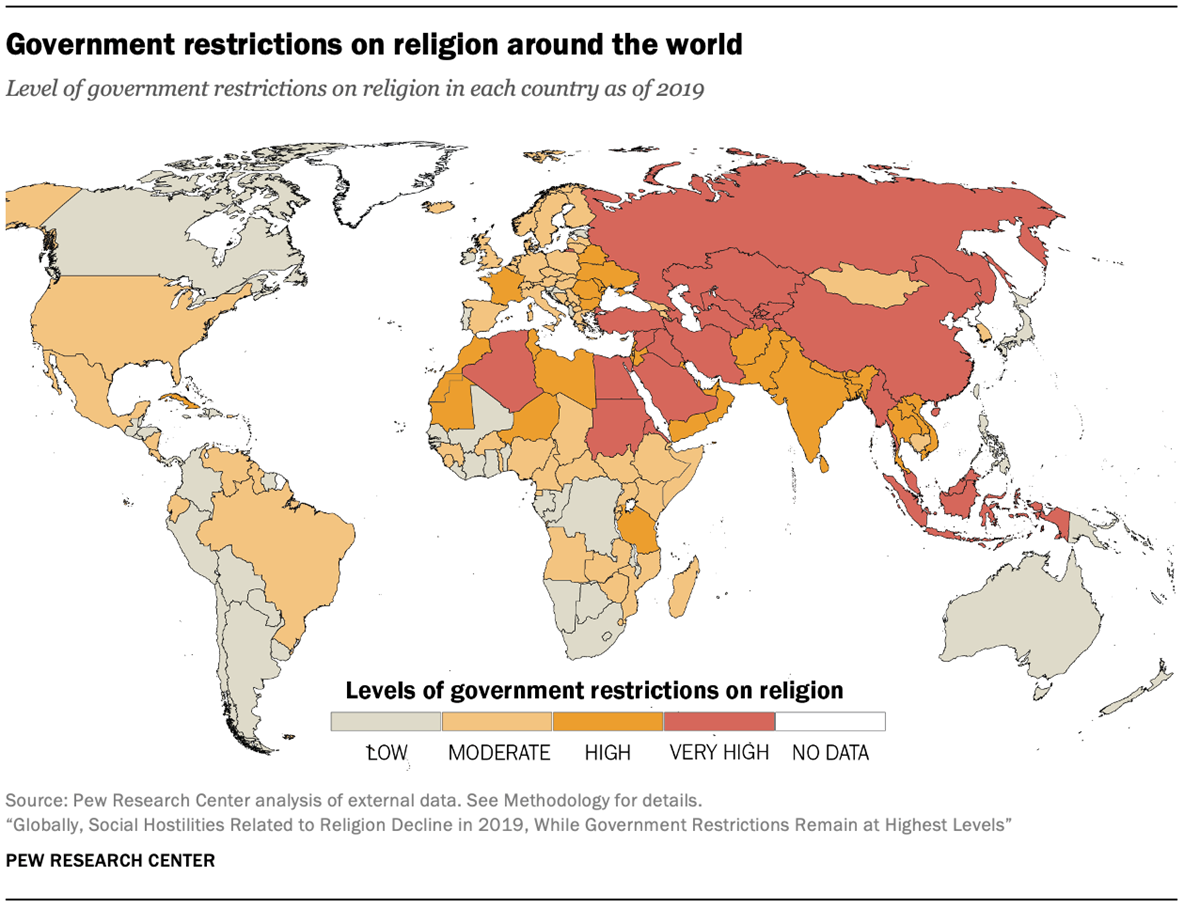 And nearly half (48%) of all nations used force against religious groups. China, Myanmar (formerly known as Burma), Sudan, and Syria tallied over 10,000 incidents each.

For example, Pew noted: “Renewed fighting between the military and armed ethnic organizations in the [Myanmar] states of Kachin and northern Shan ‘deeply impacted’ Christians, according to USCIRF. In 2019, thousands were displaced—including many Christians—in addition to more than 120,000 Rohingya who already had been internally displaced, and the military damaged over 300 churches.”

While increases were noted in the above categories, the overall median score stayed level due to decreases in two categories. Fewer countries had limits on proselytizing and on foreign missionaries (on both metrics, 77 nations in 2019, down from 81 in 2018). And there were fewer reports of countries denouncing religious groups as “cults” or “sects” (26 nations in 2019, down from 30 in 2018).

The number of nations recording “very high” scores also decreased, from 26 to 23, matching the lowest total since 2015. Kyrgyzstan and Sudan were added to the ranks of the “very high,” while Mauritania, Morocco, Vietnam, Western Sahara, and Yemen scored lower this year.

Overall, all but 14 nations scored about the same as the prior year. “Modest” increases of 1.0 or more were recorded in six countries, while eight declined similarly. No nations registered a “large” variance of 2.0 or more in their score. 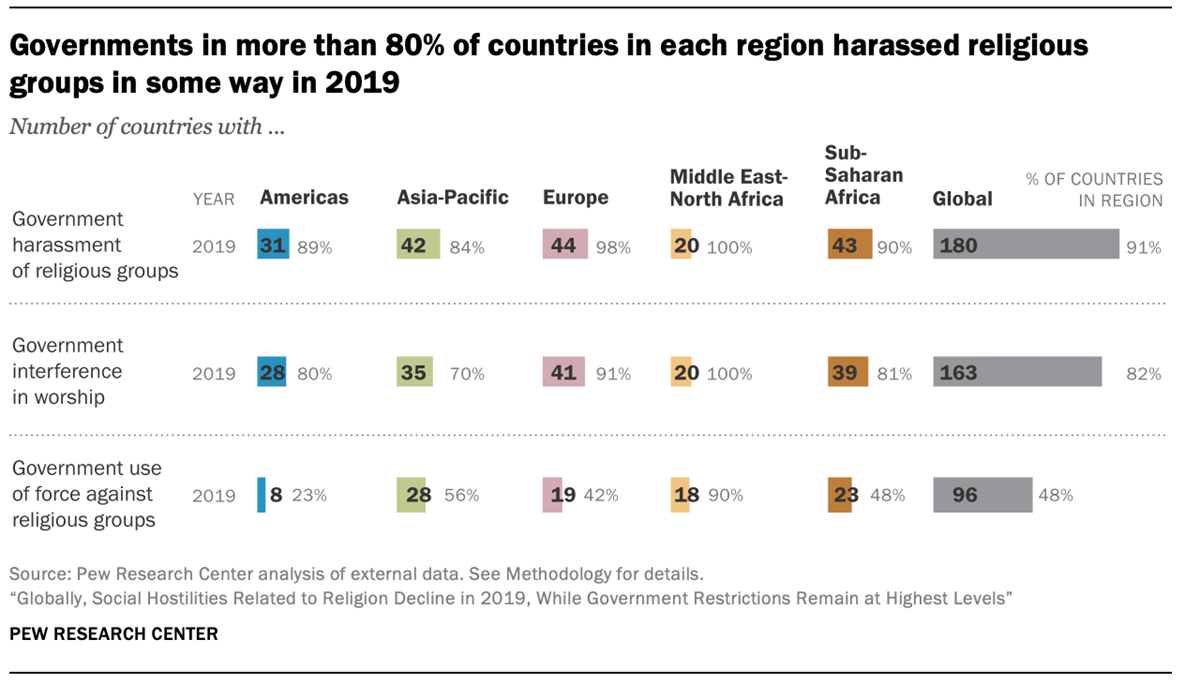 Pew noted that due to the inability of independent observers to have regular access, North Korea has not been included in the report. Also not included are two new measures among the 20 in Pew’s Government Restrictions Index, in order to maintain continuity with previous reports.

But adapting their methodology in step with a changing world, Pew will hereafter track online restrictions on religion as well as the use of new technologies for surveillance of religion.

For online restrictions, researchers identified 28 nations, including 50 percent of the Middle East and North Africa (10 nations), and 30 percent of Asia-Pacific (15 nations). Two European nations and one from the Americas complete the list.

For surveillance, six of the 10 nations are concentrated in Asia-Pacific, with two in the Middle East and North Africa and two in Europe.

For example, the United Arab Emirates blocked online testimonies from Muslim converts to Christianity. And in China, authorities used facial recognition technology to monitor and collect biometric data on Uyghur Muslims and other groups deemed to be potential threats.

But while governments around the world increasingly restrict religious freedom, the people of the world appear to be growing in their respect for it.

“Social hostilities declined in 2019 partly due to a decrease in reports of terrorism, mob violence, and hostilities against proselytizing,” Samirah Majumdar, the report’s lead researcher, told CT. 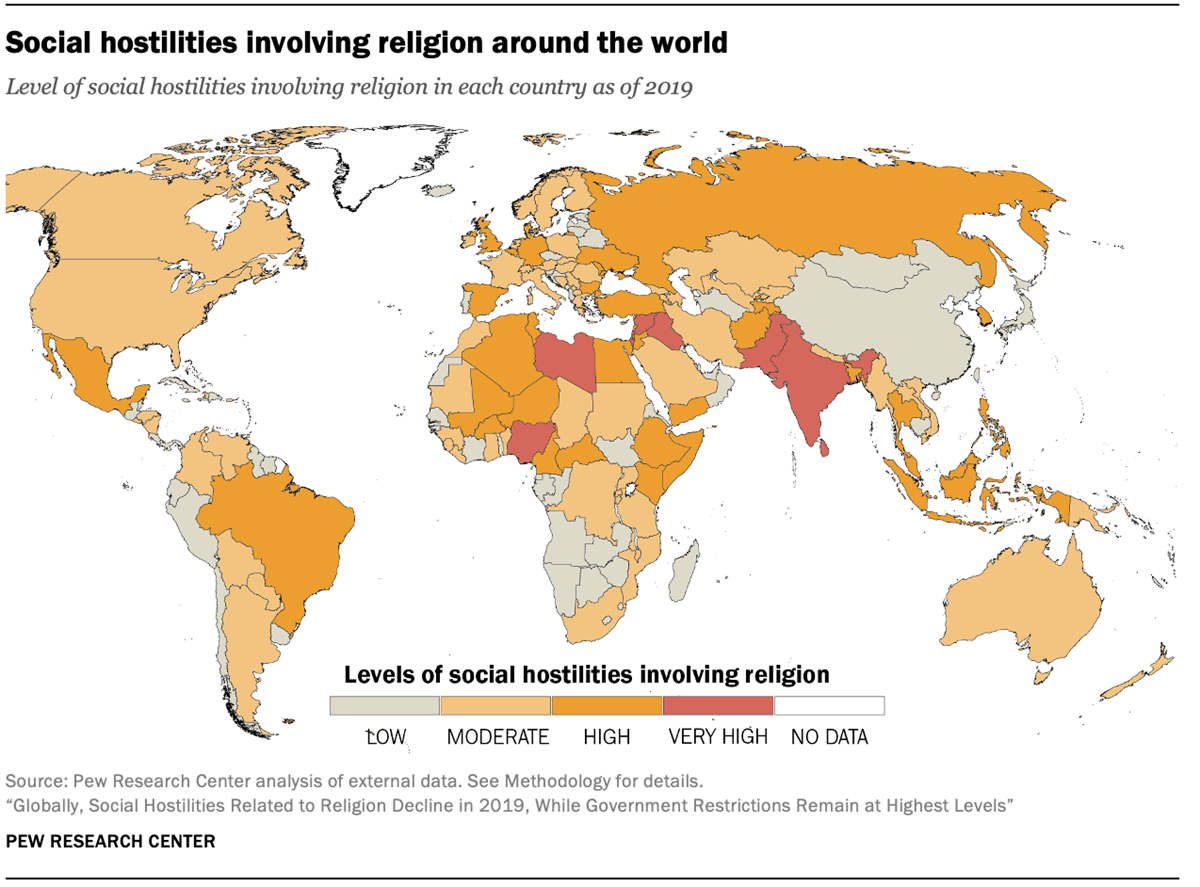 Pew highlighted declines in five of the 13 measures of its Social Hostilities Index.

Religion-related terrorism (including “deaths, physical abuse, displacement, detentions, destruction of property, and fundraising and recruitment by terrorist groups”) was recorded in 49 nations—a record low, down from 64 the prior year and from a high of 82 in 2014 (which led the US State Department to declare terrorism as the persecuted church’s biggest threat). In sub-Saharan Africa the number of countries experiencing religious terrorism stayed stable, in all other regions the tally dropped. 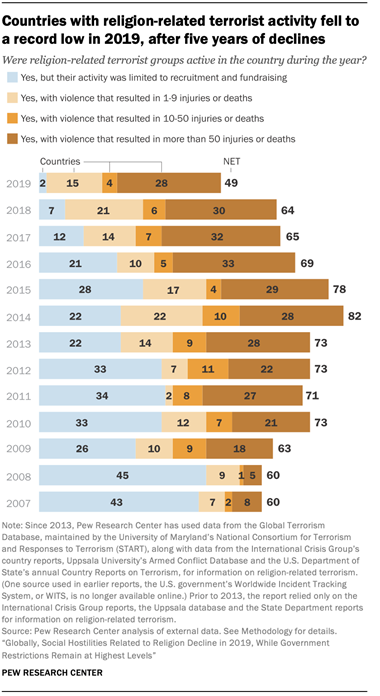 However, 28 nations did experience terrorist violence resulting in more than 50 injuries or deaths—a grim tally that has stayed relatively stable since 2013. When the report began in 2007, fewer than 10 nations suffered the same.

Pew highlighted Sri Lanka as the worst example in 2019. Over 250 people were killed and 500 injured during an ISIS-affiliated series of bombings at churches and hotels on Easter Sunday. But Afghanistan was also noted, for attacks carried out by the Taliban.

Bolivia was highlighted, as unlike the year before there were no reports of Protestant missionaries expelled from rural areas by practitioners of indigenous belief. And in Egypt, while violence toward Christians continued, there were fewer abductions and displacements reported, leading to a reduction of social hostilities from “very high” to “high.”

Pew also tallied the type of force or violence inflicted around the world. Property damage (occurring in 59% of nations), physical assaults (in 40%), detentions (in 35%), killings (in 24%), and displacement (in 19%) were ranked from most to least common.

Again, regional differences were apparent: the Middle East and North Africa scored 3.8; Europe scored 2.1; Asia-Pacific scored 1.9; Sub-Saharan Africa scored 1.7; and the Americas scored 0.7. Only Europe ticked upward. In Denmark, Pew noted, vandals destroyed over 80 tombstones in a Jewish cemetery on the anniversary of a 1938 pogrom. 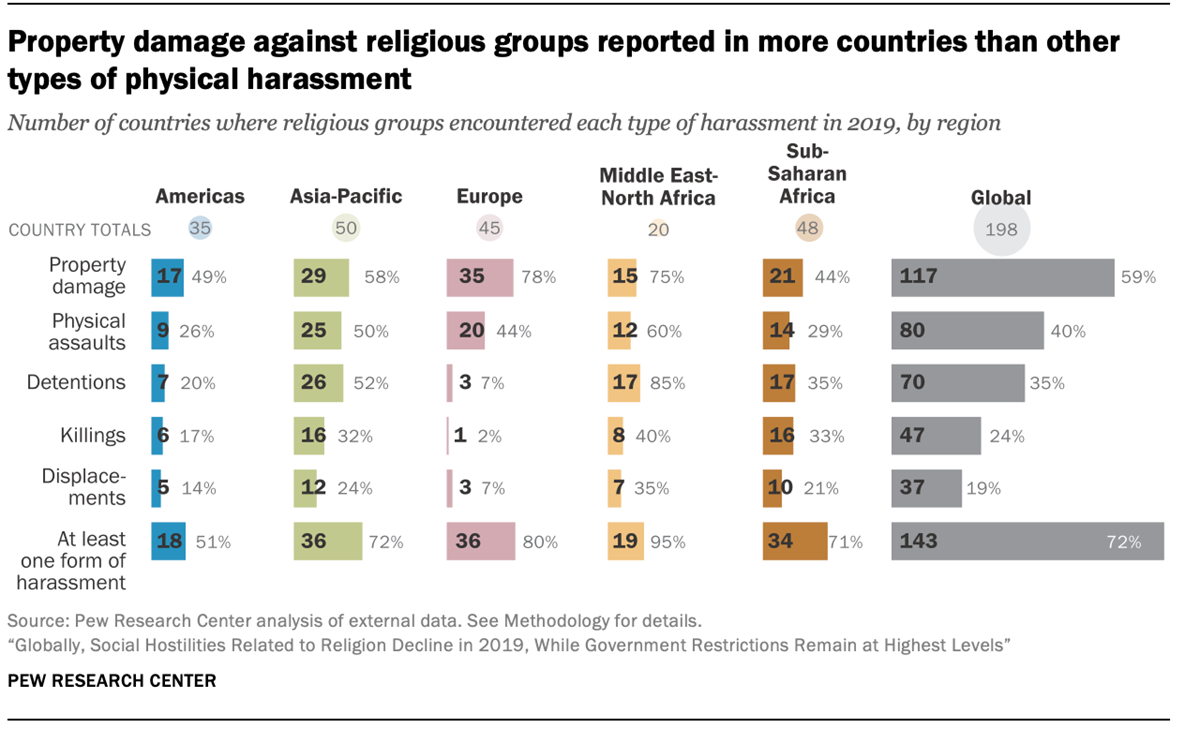 The number of nations scoring “very high” levels of social hostilities also decreased, from 10 to 8, the lowest tally in over a decade. The Central African Republic and Egypt were removed from the list.

Overall, there was more variance in social hostilities year-over-year than in government restrictions. “Modest” increases in score of 1.0 or more were recorded in 10 countries, while 32 declined similarly. One nation—Burkina Faso—scored a “large” increase of 2.0 or more, while Armenia, Greece, Kyrgyzstan, Malaysia, and Romania declined by the same amount.

An “other” category of Baha’is, Sikhs, and Zoroastrians followed, harassed in 68 nations, followed by folk religions in 32. Violations against Buddhists (in 25), Hindus (in 21), and an “unaffiliated” category of atheists, agnostics, and humanists (in 22) were less widespread.

In addition to a tally of nations, Pew also organized data to measure the impact of restrictions and hostilities on a wide scope of humanity. Among the 25 largest nations—representing 75 percent of the world population—Egypt, India, Pakistan, Nigeria, and Russia recorded the highest overall levels. Japan, the Democratic Republic of Congo, South Africa, Italy, and the United States ranked lowest. 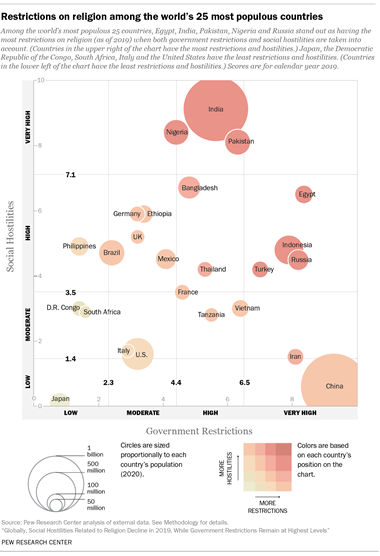 If measuring just government restrictions, China, Iran, and Indonesia join Egypt and Russia with the highest scores. If measuring just social hostilities, then Bangladesh replaces Russia in the grouping.

Only China and Japan score “low” levels of social hostility, however. The United States, while lowest overall among the 25 most populous nations, is ranked along with Iran and Italy as “moderate.”

Grading took place on a scale. The top 5 percent of nations in each index are categorized as “very high,” while the next 15 percent are “h 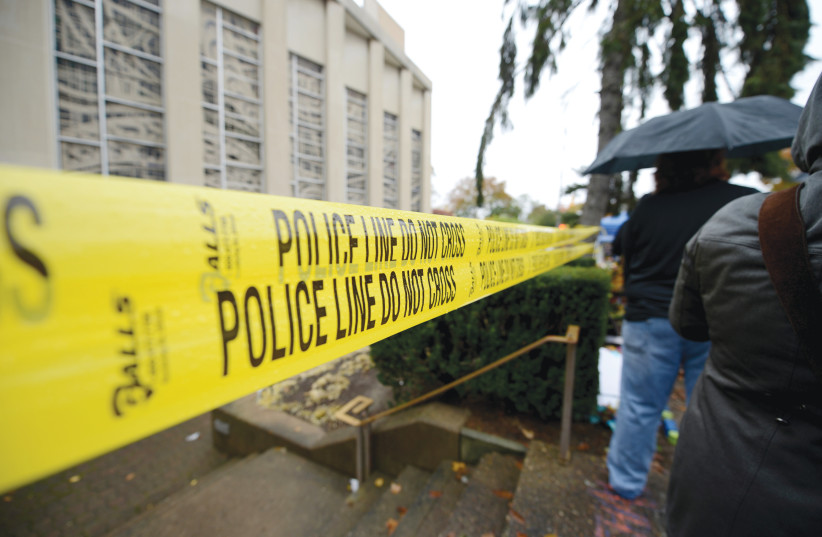 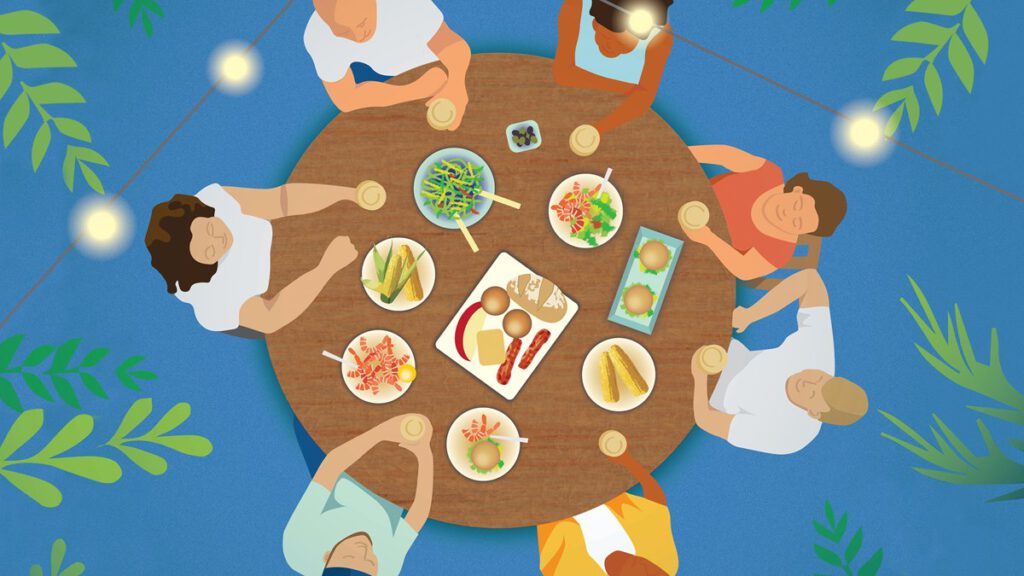