Netanyahu to Hamas: You can’t hide, IDF strikes to last as long as needed

The United States affirmed Israel’s right to self-defense as the IDF pushed forward with its military campaign against Hamas in Gaza with Prime Minister Benjamin Netanyahu vowing to pursue the militant group for as long as necessary.

Israel’s security cabinet is set to meet Sunday as ceasefire attempts by Egypt and Qatar failed to yield results.

“Fire will be met with fire,” Netanyahu said on Saturday night in a special video address just one hour before Hamas launched a heavy barrage of rockets against Israel that sent people in the South and Center of the country racing for shelter just past midnight.

He warned the Hamas leaders, “you can not hide. Not above ground and not below ground. No one is immune.

“This [military] operation will continue as long as it takes until we achieve our goals and bring peace and security to all Israeli citizens.

“Every nation has a right to self-defense,” Netanyahu said Saturday, adding that 25 nations, including the US, had spoken out in support of Israel.

“They know and we know that our actions are just and necessary,” Netanyahu said.

“It’s been five days since Hamas brazenly fired rockets at Jerusalem and other Israeli cities in an unprovoked attack.

PM Benjamin Netanyahu:
“It has been 5 days since Hamas brazenly fired rockets at Jerusalem and other Israeli cities in a totally unprovoked attack. This past week, millions of Israelis were forced into bomb shelters as missiles rained down on our cities.”https://t.co/ToeJPuwMCB pic.twitter.com/qCuvnfYkIB

The UN Security Council also plans to meet Sunday as calls to halt the violence grew within the international community, particularly in the aftermath of the direct hit Saturday on a building in Gaza that housed media outlets and Hamas military assets.

US President Joe Biden called both Netanyahu and Palestinian Authority President Mahmoud Abbas on Saturday, and his envoy US Deputy Assistant Secretary for Israel and Palestinian Affairs Hady Amr landed in Israel on Friday to help restore calm. Amr met with Gantz and other security officials on Sunday.

“We have communicated directly to the Israelis that ensuring the safety and security of journalists and independent media is a paramount responsibility.”

According to the White House, Biden in his phone call with Netanyahu also spoke of the need to protect the media.

Today the President spoke with Israeli Prime Minister Netanyahu, reaffirmed his strong support for Israel’s right to defend itself against rocket attacks from Hamas and other terrorist groups in Gaza, and condemned these indiscriminate attacks against Israel. pic.twitter.com/baHWh1b6Q2

Biden “raised concerns about the safety and security of journalists and reinforced the need to ensure their protection,” the White House said.

Netanyahu told Biden that “Israel is doing everything to avoid harming persons who are uninvolved; the proof of this is that the buildings in which terrorist targets are being hit by the IDF are evacuated of uninvolved persons.”

But Biden also clearly stated his support for Israel’s right to self-defense and condemned Hamas rocket fire. It was his second call with Netanyahu since Thursday.

“The president reaffirmed his strong support for Israel’s right to defend itself against rocket attacks from Hamas and other terrorist groups in Gaza. He condemned these indiscriminate attacks against towns and cities across Israel,” the White House stated. Biden similarly told Abbas that the rockets must stop.

Biden also discussed with both Netanyahu and Abbas the violence in the West Bank and Jerusalem. With Netanyahu, Biden spoke of his concern with respect to the Jewish-Arab violence that has rocked sovereign Israel over the last week. In both conversations he deplored the loss of innocent civilian life among both Israelis and Palestinians.

With Abbas he expressed his commitment to provide economic humanitarian financial assistance to the Palestinians and spoke of his support for a two-state resolution to the conflict.

Defense Minister Benny Gantz also spoke with US Secretary of Defense Lloyd Austin, and assured him that Israel was taking every measure to protect innocent lives.

The office of European Union foreign policy chief Josep Borrell also issued a statement in support of Israel’s right to defense and condemned Hamas rocket fire, but it also spoke of the need for a “proportional” Israeli response.

“The high representative stressed that while Israel has the right to protect its population from these kinds of attacks, it must act proportionately and avoid civilian casualties,” Borrell’s office said.

He has been in touch with EU member states and asked the EU Special representative for the Middle East peace process, Sven Koopmans, to work with the Middle East Quartet on the matter. The Quartet is made up of the EU, the UN, the US and Russia.

Borrell plans to convene a special meeting of foreign ministers to discuss the matter further.

In the past week the 15-member UNSC held two closed meetings, without representatives from Israel or the PA. These meetings concluded without a statement, as according to media reports the US representatives said that making a public comment would be counterproductive. The US is one of five UNSC members with veto power.

Sunday’s meeting, however, is going to be an open meeting, where the Israeli and Palestinian representatives, as well as the Egyptian and Jordanian ambassadors, can address the council. Israel’s Ambassador to the US and UN Gilad Erdan is expected to emphasize in his speech Israel’s right to defend itself and will call on the international community to condemn Hamas.

The meeting was originally scheduled to take place later this week when Jews celebrate Shavuot. The Israeli delegation told the UN officials that should the meeting take place during a holiday, they will not participate, making the discussion one-sided. As a result, it was agreed to hold it earlier.

Ahead of the meeting, Erdan is holding an ongoing consultation with US Ambassador to the UN Linda Thomas-Greenfield and with Deputy Secretary of State Wendy Sherman to coordinate a united position.

The ambassador also participated in a call between Biden and Netanyahu and met Amr earlier this week. During these conversations, Erdan told his US peers that the operation is a defensive act that is aimed to protect Israeli civilians and deter Hamas.

As of Saturday afternoon, it was still not clear if Sunday’s discussion would end with a joint statement or not. Diplomatic sources noted that while Israel and the US are closely coordinated, the Palestinians are likely to try and pass a resolution at the UN General Assembly later this week. Unlike the Security Council, no country has a veto power over the assembly’s resolution, which are considered mostly declarative.

Diplomatic sources estimated that given that the current president of the assembly is a representative of Turkey, such a resolution could potentially move quickly.

Netanyahu on Saturday, said that it was Hamas who had committed “a double war crime. They’re targeting our civilians and hiding behind Palestinian civilians, effectively using them as human shields.”

Israel is warning civilians to vacate prior to bombings, Netanyahu said.

“We’ve eliminated dozens of Hamas terrorists and taken out hundreds of terrorist sites, including missile launchers and buildings that Hamas used to plan and perpetrate these attacks,” Netanyahu explained.

“Two nights ago, Israel also seriously degraded the terror infrastructure of Hamas. We knocked out part of the vast subterranean tunnel network that Hamas uses to attack Israel,” he added.

He also thanked the US, Great Britain, Austria, Germany and others for their support.

In a show of solidarity with the Jewish state, Austrian Chancellor Sebastian Kurz flew the Israeli flag on top of its federal chancellery. He tweeted a photo of the blue and white flag above the building, with the statement, “the terrorist attacks on Israel are to be condemned in the strongest! Together we stand by Israel’s side.” Netanyahu thanked Kurz for his support. The Czech Republic similarly raised the Israeli flag, and the Ukrainian drone company flew a 40 meter Israeli flag above Kiev..

French President Emmanuel Macron spoke with Netanyahu on Friday. In a statement, Macron condemned rocket attacks by Hamas and said Israel had the right to defend itself. He also expressed concern about the plight of the civilian population in Gaza, which is run by Hamas.

France is a UNSC member. Its foreign minister, Jean-Yves Le Drian, spoke with his Israeli counterpart, Gabi Ashkenazi, and told him that France “condemned” Hamas attacks but called for a “proportionate” IDF response.

Ashkenazi has spoken with a number of his international counterparts, including German Foreign Minister Heiko Mass.

He tweeted that he “emphasized that #Israel will not allow #Hamas’ vicious attack on its citizens. We will continue to do what is necessary to defend our citizens. Hamas has made a strategic decision to push for a leadership role against Abu Mazen [Mahmoud Abbas] and the Palestinians.”

He added that, “I thanked @HeikoMass for [his] support of Israel’s position [and]our right to defend ourselves without compromise.

Meanwhile, Sen. Bob Menendez, chairman of the Senate Foreign Relations Committee, issued a statement on Saturday, saying that “Israeli authorities must continue taking the conscientious practice of giving advance warning of its attacks to reduce the risk of harm to the innocent.

“I am deeply troubled by reports of Israeli military actions that resulted in the death of innocent civilians in Gaza as well as Israeli targeting of buildings housing international media outlets,” said Menendez, who is considered a centrist Democrat.

“In response to thousands of rocket attacks fired by Hamas aimed at civilians, Israel has every right to self-defense from terrorists committed to wipe her off the face of the map,” his statement read. “But no matter how dangerous and real that threat may be, I have always believed the strength of the US-Israeli relationship flourishes when it is based on the shared values of democracy, freedom, pluralism and respect for human rights and the rule of law.” 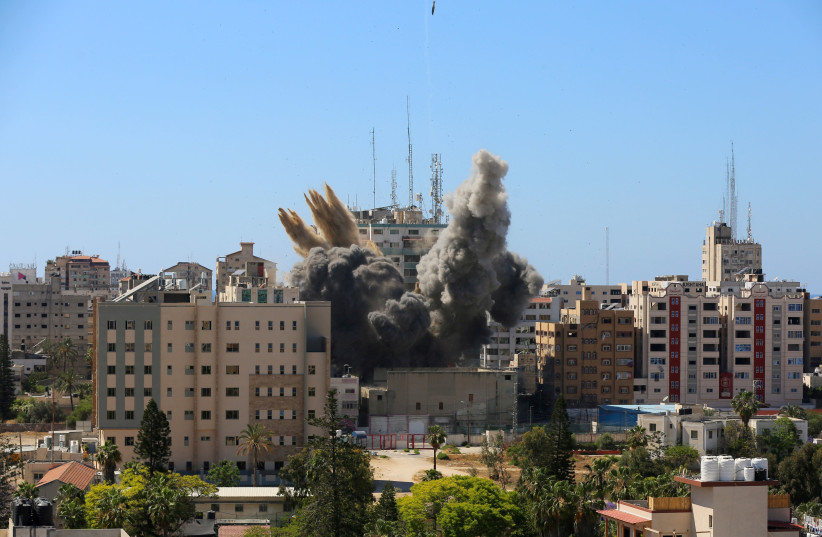