Most Jewish celebs back Biden

Written by The Ministry of Jesus Christ on November 2, 2020

Natalie Portman, Karlie Kloss, and Zoe Kravitz, among others, took to social media to showcase support for the Biden-Harris campaign, and encourage their followers to vote.

U.S. Senator Kamala Harris (D-CA) is joined on stage by her running-mate, U.S Democratic presidential nominee Joe Biden, after she accepted the Democratic vice presidential nomination during an acceptance speech delivered for the largely virtual 2020 Democratic National Convention from the Chase Cen

President Donald Trump may be drawing huge crowds at his final campaign rallies before Election Day on Tuesday, but when it comes to Jewish celebrity supporters, he couldn’t get a minyan together. Once again, the Democratic candidate, in this case Joe Biden, has won the popular vote when it comes to attracting celebrities.

Barbra Streisand, the queen of American Jewish celebrities, has been an active supporter of Biden and has appeared at fundraisers for the candidate. At one fundraiser, she introduced the candidate – online – saying, “It is my great pleasure to introduce a man who is a gentleman, a statesman, who in 48 years of government service has been a voice of reason, experience, and compassion… and who, God willing, will be the next President of the United States.”

Was thrilled to introduce Vice President Biden last night at a Zoom fundraiser for the Biden Victory Fund! @JoeBiden pic.twitter.com/ljYxASy1e5

Radio show host Howard Stern, who used to have Trump on his show frequently long before he was president, announced in April that he was “all in on Joe Biden.”

Natalie Portman often posts about politics on her Instagram account, making known her support for Black Lives Matter, among other causes, and posted a photo of herself with Biden’s running mate, Kamala Harris, this summer with the caption, “Making history.”

Actress Zoe Kravitz made a joke about the elections, posting a photo of herself holding a mail-in ballot, commenting, “so. a lot of you have been asking me about my skin care routine: i start by voting as early as possible for #joebiden and #kamalaharris and all the other democratic candidates. Then try some eye cream if you haven’t been sleeping well because the president is a racist.” In one of many get-out-the-vote posts, she posted a sexy photo of herself in see-through lingerie with a suggestive message, urging people to cast their ballots.

Actor/comedian Josh Gad has turned his Instagram feed into a one-man get-out-the-vote campaign, and he has made no secret of the fact that he is voting for Biden. He filmed a clip with a Joe Biden phone bank volunteer and chatted with her about Biden’s positions on various issues.

Julia Louis-Dreyfus posted a photo of herself with Biden on Instagram and announced she was taking part in a phone bank for Biden. She also posted a video of herself voting and asked fans to send their own voting videos.

Model Karlie Kloss, who converted to Judaism before marrying Jared Kushner’s brother – which makes her Ivanka Trump’s sister-in-law – posted a photo of herself on Instagram wearing a pro-Biden face mask as she voted.

On the other side of the aisle, Roseanne Barr has joined a relatively small list of celebrities who have endorsed Trump and frequently posts about politics on social media. In June, she released a video in which she claimed, “Hear me when I say this: Trump is, in my opinion, the first woman president of the United States.”

It’s likely a few more celebrities will weigh in before the last ballot is counted, but star power is not always the surest path to the White House.

Belinda Bauman: The Day After 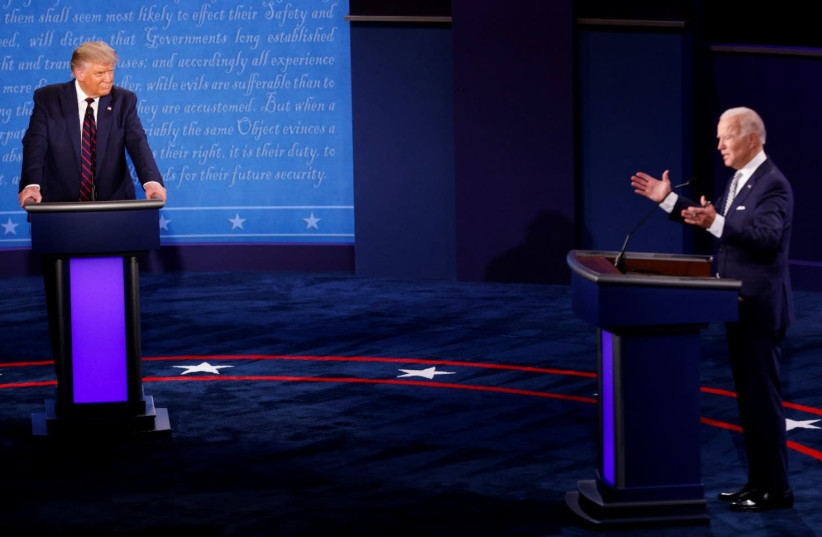