For the first time, the US appears to be confronting Turkey over its fueling of conflict all over the Middle East.

Pompeo’s trip appeared to illustrate a new US commitment to listening to Athens and Nicosia, rather than appeasing Ankara’s aggression. The trip raised eyebrows in Ankara where leaders have gotten used to bashing the US while also having a direct line to the White House.

Most recently Pompeo aimed criticism at Turkey for fueling tension in Azerbaijan and Armenia because Turkey had said it could support Azerbaijan militarily. He also expressed concern that Syrian mercenary fighters, many of them wanted for looting in Afrin and Libya and known for religious extremism, had been recruited by Ankara to fight Armenia.

For the first time, the US appears to be confronting Turkey over its fueling of conflict all over the Middle East. In the last year Turkey has invaded Syria, bombed Iraq, threatened Greece with forcing refugees across the border, stoked tensions in Idlib, signed deals with Russa, sent arms and Syrians to Libya illegally, threatened to “liberate” Jerusalem from Israel’s control, threatened the UAE, bashed the Israel-UAE deal, hosted Hamas terrorists, encouraged war between Azerbaijan and Armenia, and continued to put journalists and opposition politicians in prison.

Pompeo has had a mixed record on Turkey’s role. On the one hand his State Department has pushed envoy James Jeffrey on the region and Jeffrey is deeply pro-Turkey. This resulted in the US misleading Kurdish civilians in eastern Syria in 2019, to the extent that days before a Turkish invasion US officials were telling Kurdish activists such as Hevrin Khalaf that Ankara would not attack them. Days later, on October 12 she was dead, murdered by Turkish-backed extremists.

However, the US Secretary of State has also been critical of Turkey over its turning of the historic church and museum of Hagia Sophia back into a mosque. He has also sad Ankara would not be allowed to slaughter Kurds. The State Department also critiqued Turkey’s President for hosting Hamas terrorists.

The recent trips to Cyprus and Greece seem to have caused Turkey to wonder if Pompeo has finally changed tact on Turkey.

Instead of the double game where the US coddles Turkey with some diplomats but expresses concern with others, the trip purposely avoided meeting Turkish officials. Over the years Ankara’s officials have gotten used to meeting with Russia and Iran while always bashing European and western leaders. Turkey does not take the West seriously and thinks slandering the US, France, Germany, Austria, Holland and other countries is how to get progress from western officials. Turkish pro-government media for instance, regularly bashes the US while not critiquing Russia and Iran the same way.

Mevlut Cavusoglu, Turkey’s foreign minister, recently threatened US Speaker of the House Nancy Pelosi. Turkey has also bashed Joe Biden for critical comments. Cavusoglu has called Europe “spoiled, racist children” and threatened to “crash and kick out to sea” critics in Greece. It is hard to find a week in the last year that Turkish officials have not attacked some western country, while at the same time demanding they work with Turkey.

Now the US top diplomat, who is also one of the key figures in the Trump administration and central to the US role in the world today, is more critical of Turkey. That the US State Department has slammed Ankara for hosting Hamas and also for sending Syrians to Azerbaijan appears to show that Washington understands that Turkish aggression is harming US interests and allies.

For years the pro-Ankara lobby in Washington sold the White House on a theory that Turkey would work with the US against Iran. However Turkey supported trade with Iran and opposed US sanctions and wanted the Iran Deal to remain. Turkey regularly hosts Iranian delegations and greets them warmly. Turkey works with Iran and Russia in Syria to sideline the US. Ankara accuses the US of working with “terrorists” in Syria but has never used similar language against Iran. It may be that the US State Department is merely playing both sides, but Pompeo’s high level visits to Greece and Cyprus appear to show a shift in attitude.

Turkey has sunk political support into bashing Biden and supporting Trump. It has gambled since 2016 that it could interfere in US domestic politics to get the results it wanted. When the Turkish President visited the US in 2017 Turkish security even beat up US peaceful protesters in Washington, a sign that Ankara felt it controlled Washington.

To show the US who was boss Ankara harassed a US soldier at an airport in Turkey, detained a US pastor of false charges, and imprisoned a US consular employee, as well as harassing US journalists. Ankara believed the US would appease its policies and get into line. Now Ankara’s attempt to control US foreign policy may be slipping. 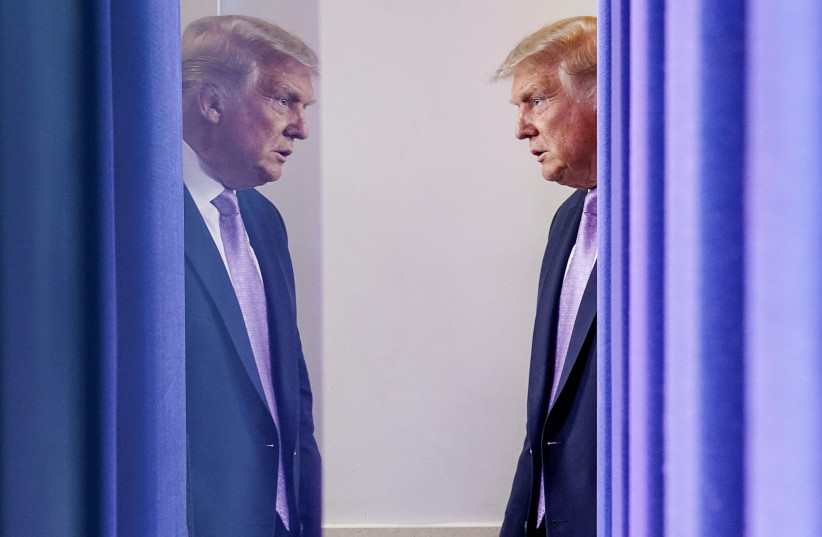