“This new deal includes the structural transformation of energy and transportation sectors… and creation of alternative and green jobs,” said the party spokesperson.

By KRISTINA JOVANOVSKI / THE MEDIA LINE

Turkey’s new Green Party will push for a “Green New Deal” that supports carbon taxes and increases the use of renewable energy, the movement tells The Media Line.

The party launched on Monday, the International Day of Peace, with 110 founding members, and handed in its application for registration to the Interior Ministry, its website said.

Party spokesperson Emine Özkan, 27, argued that a “Green New Deal” was the only solution to Turkey’s climate crisis.

“This new deal includes the structural transformation of energy and transportation sectors, increase in energy efficiency at all levels, creation of alternative and green jobs [and] improvement of life standards for all,” Özkan wrote in a statement to The Media Line.

Berk Esen, an assistant professor of political science at Sabancı University in Istanbul, said the party could appeal to 5 to 10% of the electorate who are urban, cosmopolitan, educated and care about environmental issues.

While unlikely to win a national election, it could play a role in parliamentary politics, where parties need to pass the 10% threshold nationally to enter the legislature.

“As a minor party, part of a larger coalition, it can certainly have an impact,” said Esen.

Environmental issues have played a major role in Turkish politics.

In 2013, anti-government demonstrations across the country, known as the Gezi Park protests, were sparked by plans to demolish an Istanbul park.

Last summer, a mining project in western Turkey led to a wave of protests. Those opposed to the mine claimed the company would flatten the wooded areas that provide large amounts of oxygen and that the firm’s use of cyanide would contaminate water resources.

Esen said he does not think President Recep Tayyip Erdoğan’s government is taking environmental issues seriously, saying Turkey is a developing country that needs to use its natural resources to fuel economic growth.

Özkan echoed this concern, saying that the biggest threat to Turkey’s environment came from those in power seeing the ecosystem as nothing more than a source of revenue.

“As a result of that ‘fossil’ mentality, we face in every single corner of the country a violent exploitation of natural resources and an eco-massacre,” she said.

Environmental problems are widespread in Turkey, from air pollution due to the notoriously bad traffic to importing plastic waste from Europe.

According to the European Commission’s Eurostat department, Turkey is the top destination for the continent’s plastic waste, importing 11.4 million metric tons in 2019. The figure has nearly tripled since 2004.

One issue that has garnered many headlines is the lack of green space, taken up by construction projects.

Erdoğan has highlighted these mega-projects during political campaigns. In the 2018 presidential election, he flew on his plane into Istanbul’s gigantic new airport before it opened.

Environmentalists are particularly concerned about a government proposal to build a massive canal that would run parallel to Istanbul, connecting the Black Sea north of the city, to the Sea of Marmara south of the city.

The state news agency says it will be 28 miles long and have an estimated 160 vessels a day transit it. The government held its first tender for the proposal in March.

Erdoğan initially suggested the idea in 2011, calling it his “crazy project.”

The government estimated it would cost 75 billion Turkish liras, which is about $9.8 billion based on the current exchange rate.

However, critics say that, like for other public projects, the price will likely run much higher.

“The single point we agree on with the government is that this project is totally crazy and environmentally destructive,” Özkan stated.

The government claims the proposal will create another source of revenue while reducing traffic in the Bosporus strait and preventing dangerous cargo from passing through the country’s biggest city.

Last December, a ship ran aground while passing through the strait. While such events are rare, Erdoğan has used them to suggest a canal would provide a safer route.

Erdoğan’s critics say what he really wants is the money and political benefits it may draw.

Against the backdrop of the canal project, expensive properties on both sides of its route are being sold.

Esen said that appeals to the construction sector, which is Erdoğan’s main base within the business community.

“If such a project were to be constructed, that land is going to generate more money. It [would become] more [valuable] and that would enable Erdoğan and his allies to capture some rent, some profits,” Esen said.

Leading From A Healthy Soul Tens of thousands protest against Netanyahu as fines issued for violations 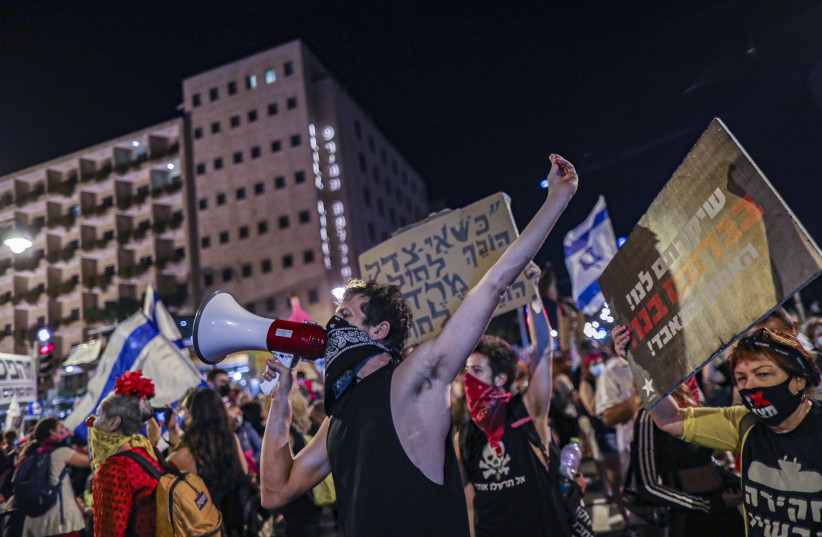