Day of Prayer Provides Way to ‘Serve With’ Persecuted Church

On Nov. 1, Christ followers around the world will recognize the International Day of Prayer for the Persecuted Church – a global prayer movement for Christians who boldly witness for Christ at any cost in nations where Christianity is not welcomed.

Each day, millions of Christians around the world are persecuted for their faith. From Pakistan to Kazakhstan, Nigeria to North Korea, Christians routinely face discrimination, harassment, violence and even death for their faith in Jesus.

Over the years, the International Day of Prayer has served as a platform to highlight the stories of persecuted Christians and mobilize the global Church to respond to their plight.

In so doing, the International Day of Prayer has also been a source of solidarity and encouragement to persecuted Christians by reminding them that they are part of a larger, global family of believers.

“When we ask persecuted Christians how we can help them, the first thing they say is ‘Pray for us!’” said Todd Nettleton, spokesperson for The Voice of the Martyrs (VOM) and host of VOM Radio. “[International Day of Prayer] is a direct response to their No. 1 request.”

In advance of the International Day of Prayer, VOM, a nonprofit organization serving persecuted Christians since 1967, has released a new video telling the story of Christians in the Central African Republic who were forced to flee their homes when Islamists attacked.

The video, “Janette: Central African Republic,” also tells of the courageous faith that leads the believers to forgive their persecutors.

Nettleton recounted words from a pastor in Vietnam: “When you pray for us, you are serving with us in Vietnam!”

“On [International Day of Prayer] Sunday – and really every day throughout the year – you can serve with our persecuted brothers and sisters by bringing their needs before our Father in heaven,” Nettleton said.

“Pray for 600 imprisoned Christians in Eritrea. Serve with imprisoned pastors in China – and pray for their families also. Pray for Christians facing growing threats in India. Pray for Janette and those who share her story. Please pray for persecuted Christians!”

“Janette: Central African Republic” is available for free download (or to request as a free DVD) at persecution.com/idop, along with additional free resources for individuals and churches, such as presentation slides, a church bulletin insert, a sermon outline, a guide with tips and ideas for churches and free sheet music to the Keith and Kristyn Getty hymn “Christ Our Hope in Life and Death,” featured in this year’s video.

International Day of Prayer resources are also available for purchase, including a set of prayer map posters highlighting countries where Christians are persecuted, a special issue of VOM’s magazine and prayer reminder bookmarks/brochures.

For more than three months, four Lao Christians have been jailed in the country’s Khammouane province for planning a christian funeral that is contrary to the local customs.

According to Radio Free Asia, on July 3, the four Christians traveled to Khammouane’s Phousath village to attend a funeral that was deemed by village authorities to have violated Lao customs and “divided community solidarity.” As a result, they were arrested before they could conduct the christian ceremonies, a Phousath village official said.

The local villagers wanted to perform ceremonies for the deceased christian “according to our culture handed down to us by our ancestors,” the official said. “When someone dies, we help by making donations, sharing food and asking [Buddhist] monks to come and pray at the home.”

But the official said the Christians “wanted to do things that violate our traditional customs. They were preparing things that we felt were strange and wrong and do not understand, and so we acted in order to prevent them from happening.”

While no trial has been held to prosecute these four Christians who are from different villages, the police investigation has been completed, and no decision was made as to what happens to them next. Their wives and children are facing hardships due to the loss of income and uncertainty about the four men’s fate.

An official in the religious affairs department of the Lao central government told RFA on Oct. 12 that his department will now work with the Lao Front for National Construction and the Evangelical Church of Laos to win justice for the four imprisoned villagers (International christian Concern).

Justice Barrett: Without fear or favor 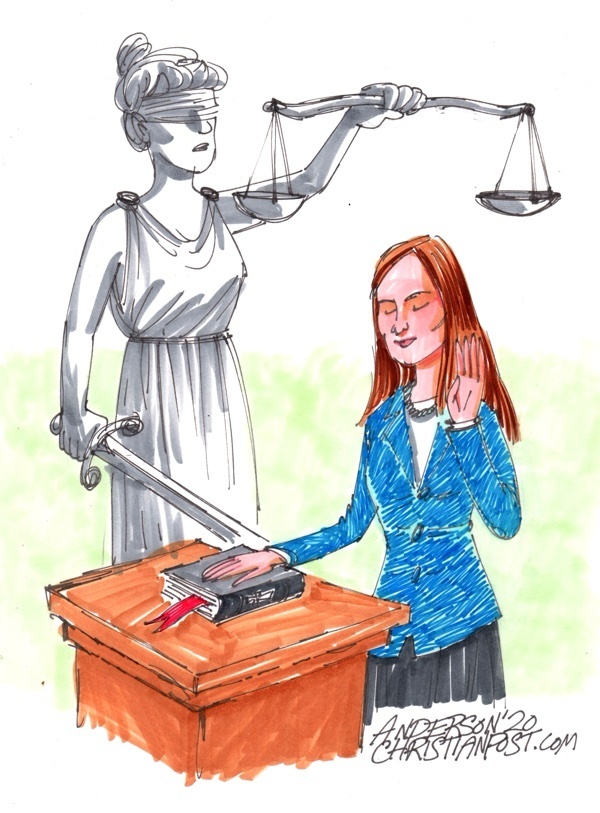